Inside look: NY’s largest casino opens with hope to revive the Catskills

When the $1.2 billion Resorts World Catskills opens Feb, 8, it will end more than four decades of hopes of a casino for the region.

Inside look: NY’s largest casino opens with hope to revive the Catskills

A look inside the Resorts World Catskills casino, under construction and opening soon in Monticello Jan. 25, 2018. 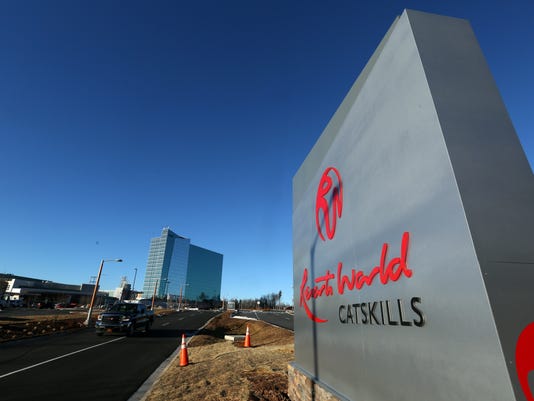 THOMPSON – Exit Route 17 in Sullivan County and go to the former Kutsher's Country Club and you can still see the remnants of a once vibrant vacation spot.

The main hotel building is still standing, but boarded up. The once grand circular driveway where valets would rush to take your bags is now dirt and weeds.

The tennis courts across the street are still there, remarkably, but without a fence and worn down from years of abandonment.

In fact, one of the only evidence it was even one of the Catskills most prominent hotels is a fading sign on the property's empty racquetball building.

The old Borscht Belt Catskills started to fade decades ago. It was once home to more than 500 hotels and bungalow colonies that greeted mainly New York City-area tourists looking to get away to the mountains.

That's when the $1.2 billion Resorts World Catskills opens seven miles from Kutshers, ending more than four decades of failed efforts to bring a casino to the area.

The casino adds hope that the region can once again be a thriving tourism hub. Indeed, it is built on the land once owned by the Concord Hotel, another one of the former top Catskills' hotels.

The new 18-story, gleaming hotel tower in Thompson pokes out of the woods on Route 17, a symbol, perhaps, of a new beginning.

But for all the expectations, the new casino faces questions about whether it can succeed in a Northeast gambling market near saturation. Three other upstate casinos that opened a year ago have underperformed. 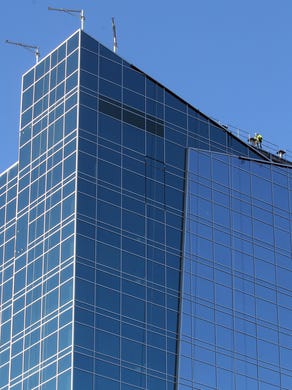 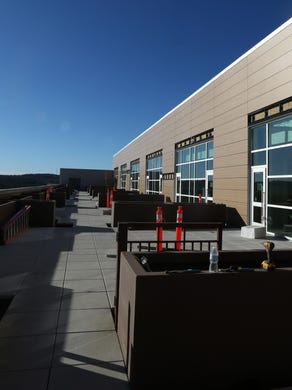 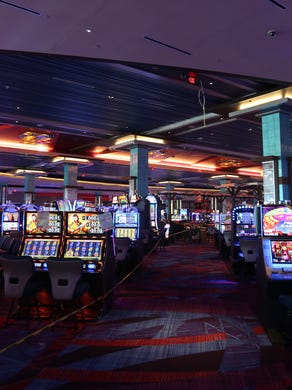 Skylight over an entrance to the Resorts World Catskills casino, under construction in Monticello Jan. 25, 2018. Peter Carr/The Journal News
Fullscreen 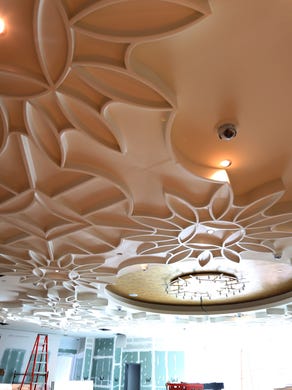 The casino and its supporters, though, view the project as a cut above the other upstate facilities: It's 90 miles from New York City; has 332 all-suite hotel rooms; and caters to high rollers with VIP lounges, private gambling rooms with butlers, and villas with their own pools.

"It is an integrated resort model. It’s a not a regional casino model," Charles Degliomini, the casino's executive vice president, said from his office window overlooking the Catskill Mountains.

The casino near Monticello was set to open March 1, but the owners, Empire Resorts, pushed it up to Feb. 8 as a way, in part, to celebrate the Lunar New Year.

The reason was telling: About 30 percent of the gaming floor, a whole wing, is targeted toward Asian gamblers.

"Are we going to compete with regional casinos? Sure. For the mass market business? Sure," Degliomini said. "But our business model is going to be successful because we are pursuing markets that are underserved."

The casino has a deep-pocketed investor: Empire Resorts is controlled by billionaire KT Lim, the chairman of the Malaysia-based Genting, one of the world's casino giants that owns Resorts World New York City in Queens.

So when the casino won one of four New York gaming licenses in December 2014, Empire Resorts boosted its investment and its target audience, focusing on wealthy gamblers at the only full-scale casino in the New York metropolitan area.

The casino will open with 2,150 slot machines, 130 table games, five gaming areas, two casino/entertainment bars; a 2,800-spot parking garage and lot; and a food court. Fine-dining restaurants should be opening within weeks after.

The whole place will employ about 1,400 people. More than 100 hotel rooms will open on Feb. 8, with the rest available sometime in March.

More: A huge indoor waterpark is coming to NY

The region has talked about adding casinos to its aging hotels since the 1960s — before Atlantic City and Connecticut built them and drained the area of visitors and jobs.

The child poverty rate in Sullivan County is about 26 percent, which is the most in the region and above the statewide average.

The casino is "truly capturing an interest for everyone," Roberta Lockwood, CEO of the Sullivan County Visitors Association, said.

When visitors "come and they see our backyard and they see the beauty of the Sullivan Catskills and the Catskills’ experience, we are hopeful that it’s going to be a continued, repeat visitation."

Resorts World is partnering with other regional attractions, including the Woodbury Commons outlet mall and the Bethel Woods performing arts center.

The casino itself has high expectations for revenue. Its application to the state said it would gross nearly $302 million in 2019 — which is well above what the other casinos in New York have projected.

Analysts for Moody's and Standard & Poor's have raised concerns about whether Resorts World can succeed.

The $425 million del Lago casino in the Finger Lakes, for example, has struggled after entering an already crowded upstate gambling market. So too has Rivers Casino in Schenectady.

Downstate, Resorts World will be competing with casinos in nearby Pennsylvania, Atlantic City; Connecticut, and two major racetracks with video-lottery terminals: Empire City in Yonkers and Resorts World at Aqueduct.

"However, unlike del Lago and Rivers, Resorts World is located within reasonable driving distance from the densely populated New York metro area and has the downstate portion of New York as one of its primary market areas."

The casino is also benefitting from a series of tax incentives from the Sullivan County Industrial Development Agency.

The casino, IDA records show, appears to be getting a $35 million sales and use tax exemption, as well as a 16-year payment in lieu of taxes for the golf course that will save it about $1 million, as well as a $1.5 million exemption on the entertainment village.

The IDA, however, has repeatedly declined to explain its tax breaks.

Asked Wednesday to answer questions or clarify the details about the incentives, the IDA's executive director Jennifer Flad declined to do so, saying, "Our policy is to provide the documents and not comment on them."

The USA Today Network's Albany Bureau filed a Freedom of Information last July asking the IDA for records on its casino incentives and for all communication between the casino owners and IDA officials since 2013.

The request was only partially filled: The IDA denied providing the communication with the casino owners, saying doing so would "bring a tremendous and unreasonable administrative burden" to the agency.

The Albany Bureau appealed, but was rejected. The state Committee on Open Government then issued an advisory opinion, saying the request did not appear to be "unreasonably burdensome."

But the agency still refused, with its CEO Steve White responding in an email in September, "While it might be easier to avoid conflict by caving to every request, sometimes you have to do what you know is right."

Degliomini said the local incentives were important to the project. Other upstate casinos have received local breaks, too.

"It allowed us to invest more heavily in this facility," he said. "You wouldn’t have netted a 1.6 million square foot building employing 1,400 people absent the benefits we received from the county of Sullivan IDA."

The main hotel of former Kutsher's resort in the Catskills is now an abandoned building. (Photo: Joseph Spector, Albany Bureau) 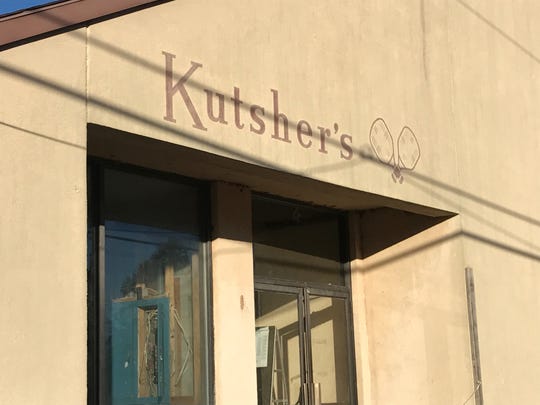 A fading sign at the former Kutsher's Resort in the Catskills shows the old and new of the region with a $1.2 billion opening Feb. 8. (Photo: Joseph Spector, Albany Bureau)

Empire Resorts also own nearby Monticello Raceway, a harness track with 1,110 video-lottery terminals.

It will stay open and continue to serve a largely local crowd.

Degliomini pointed out that the new casino isn't trying to reenact the Catskills of the past.

What it will do, he said, is bring tourism and an influx of hospitality jobs that had been the bedrock of the community's vibrance.

"We owe a lot to our Catskills roots, but we’ve kind of evolved way behind that at this point," he said.

Some local residents hope the new casino can revive the area.

Patti and Jonathan Sunshine own the Funky Hippy Chic Boutique on the outskirts of the casino property.

They both worked at the old Catskills resorts.

"We know what this area was like. And no one wants to revisit the Borscht Belt. Some people think it was a bad thing. It was a great thing," Patti Sunshine said.

Resorts World is "going to be something new. It’s going to be who knows what. We’ll wait and see."