St. Joseph football has huge second half to best AC

St. Joseph football has huge second half to best AC 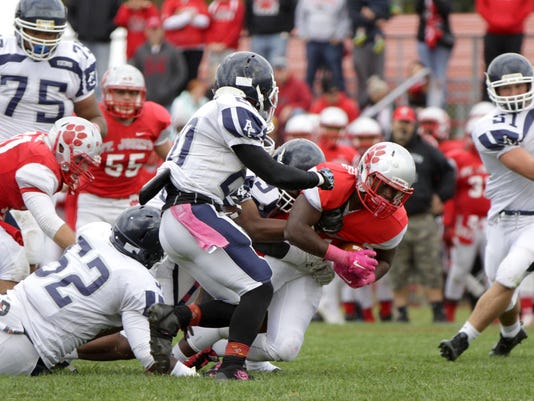 St. Joseph running back Qwahsin Townsel drags a pile of Atlantic City defenders behind him during a 53-15 triumph on Oct. 17.(Photo: Mike Walsh/Photographer)

The St. Joseph High School football team bounced back from an out-of-state loss in a big way.

The Wildcats dismantled visiting Atlantic City, 53-15, on Oct. 17, mostly with an explosive running attack at Bill Bendig Field. St. Joseph improved to 4-2 while the Vikings fell to 1-4.

“It was a much better performance all-around offensively and defensively,” St. Joseph coach Paul Sacco said. “We made some changes on offense and defense and it worked out, but many of the kids that have been in there did a much better job.”

The Wildcats scored 53 points, all in the final three quarters. After a scoreless opening 12 minutes, Wildcats senior Keagan Harvin scored on a 14-yard run for a 7-0 lead. The Vikings answered with a rushing touchdown of their own, and converted a two-point pass to take a one point lead.

However, the Wildcats offense couldn’t be stopped the rest of the game. A’Laam Horne, who missed most of last game with an ankle injury, scored the first of his two touchdowns to give the Wildcats the lead for good. Despite missing most of the practices during the week, Horne ended the game with 17 carries and 223 yards on the ground.

Twin brother Salaam Horne also had a big game, including finding Matt Tucker for a 5-yard touchdown pass to end the first half scoring and give the Wildcats a 19-8 halftime lead.

St. Joseph scored five more times in the second half. A’Laam Horne scored on a 13-yard run to open the third quarter as the Wildcats started pulling away. Salaam Horne returned an interception 55 yards for a score, and later added a rushing touchdown from three yards out.

“You can see what the Horne brothers can do when they get healthy,” Sacco said.

Sophomore Qwahsin Townsel, a transfer from Holy Spirit who sat out the required 30 days, gained over 100 yards in his second game of the season. The fullback also scored on a 13-yard run later in the third quarter.

“He did well last week, but he is still learning the whole system,” Sacco said of Townsel. “He can be a workhouse. He is a 200-pound fullback and he has decent speed.”

After Salaam’s rushing touchdown, DeAndre Kennedy became the sixth different Wildcat to find the end zone, scoring on an 11-yard run to cap the scoring for the day.

“We finally put it together. We had a lot of first downs. I think we had 24 or 26 first downs,” Sacco said. “Atlantic City has a lot of athletes, they are physical and get to the football. But I thought overall the kids did a good job.”

Next up for St. Joseph is Mainland, which is just 2-3 on the season, but its last two losses came against St. Augustine and Buena. Buena edged Mainland 14-13 on Oct. 16.

“It always tough to play down at Mainland,” Sacco said. “I think they are a very good football team. They are relentless on defense, which seems to be their strong point right now. And they have great special teams.”

CONNECTTWEETLINKEDINCOMMENTEMAILMORE
Share your feedback to help improve our site experience!