Will Hurricane Ida hit New Jersey? What to know as the storm makes landfall in the Gulf

Category 4 hurricane will weaken before it hits New Jersey, but flooding and heavy rain likely.

Will Hurricane Ida hit New Jersey? What to know as the storm makes landfall in the Gulf

Hurricane Ida has strengthened to a Category 4 overnight, with maximum sustained winds now 150 mph. Dr. Ryan Truchelut of WeatherTiger is walking you through the very latest on this devastating hurricane hit for southeast Louisiana and Ida's far-flung impacts on Mississippi, Alabama, and western Flo Lafayette Daily Advertiser

UPDATE: Ida downgraded to tropical storm, here's what it means for its impact on NJ

As Hurricane Ida slammed into Louisiana and Mississippi on Sunday, forecasters expected it to weaken as it travels across the Midwest and turns east before reaching New Jersey sometime late Tuesday. But severe flooding and extreme showers remain likely for the Shore.

Although the Category 4 hurricane has strengthened for a likely wallop on the Gulf Coast, the National Weather Service predicts it will be reduced to heavy rains and reduced winds mid-week.

“Remnants of Ida are expected to ride along a frontal boundary and affect the region mainly from late Tuesday night into Thursday morning,” the forecast stated. “A period of moderate to heavy rain is possible during this timeframe. However, there is still uncertainty as to exactly where and when the heaviest of the rain will fall. Given recent wet conditions, flooding is possible. 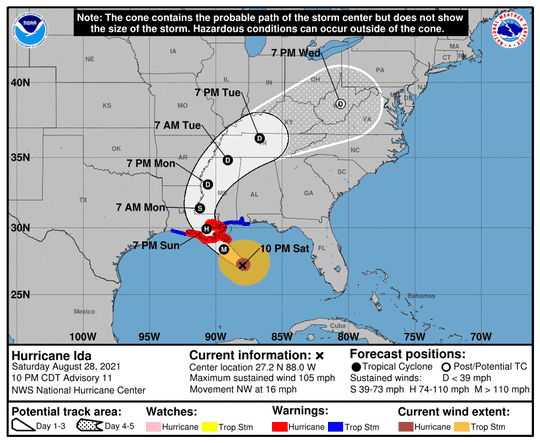 The uncertainty had Ida tracking to Tennessee and southern Kentucky by next Wednesday morning, but it's unknown at this time how strong the storm will be by then.

Stay safe: Hurricane on the way? Resources to use for New Jersey residents

Like many pending storms, forecasters and meteorologists agreed the storm is still "days out" to predict any possible impacts it could have on New Jersey at this time. This includes guessing how much — or whether there will be any — rain from Ida until it makes landfall and how it develops over this coming weekend.

The storm is being carefully watched following the impact from Tropical Storm Henri, which brought torrential rain and significant widespread flooding that prompted dozens of evacuations last weekend.

Residents being a evacuated due to massive flooding from tropical storm Henri (Photo: Brian Johnston)

“Clouds will begin to increase as the remnants of Ida make their approach to the region. Showers are possible during the overnight hours,” he stated online about the Tuesday impact.

For Wednesday he predicted, “the remnants of Ida will be over the region and will have periods of rain that will be heavy at times. Flash flooding will be a threat. Winds will be from the northeast at 15-25 mph with gusts up to 40 mph possible. Total rainfall accumulations of 2″-6″ are expected.”

Joe Strupp is an award-winning journalist with 30 years’ experience who covers education and several local communities for APP.com and the Asbury Park Press. He is also the author of two books, including Killing Journalism on the state of the news media, and an adjunct media professor at Rutgers University and Fairleigh Dickinson University. Reach him at jstrupp@gannettnj.com and at 732-413-3840. Follow him on Twitter at @joestrupp